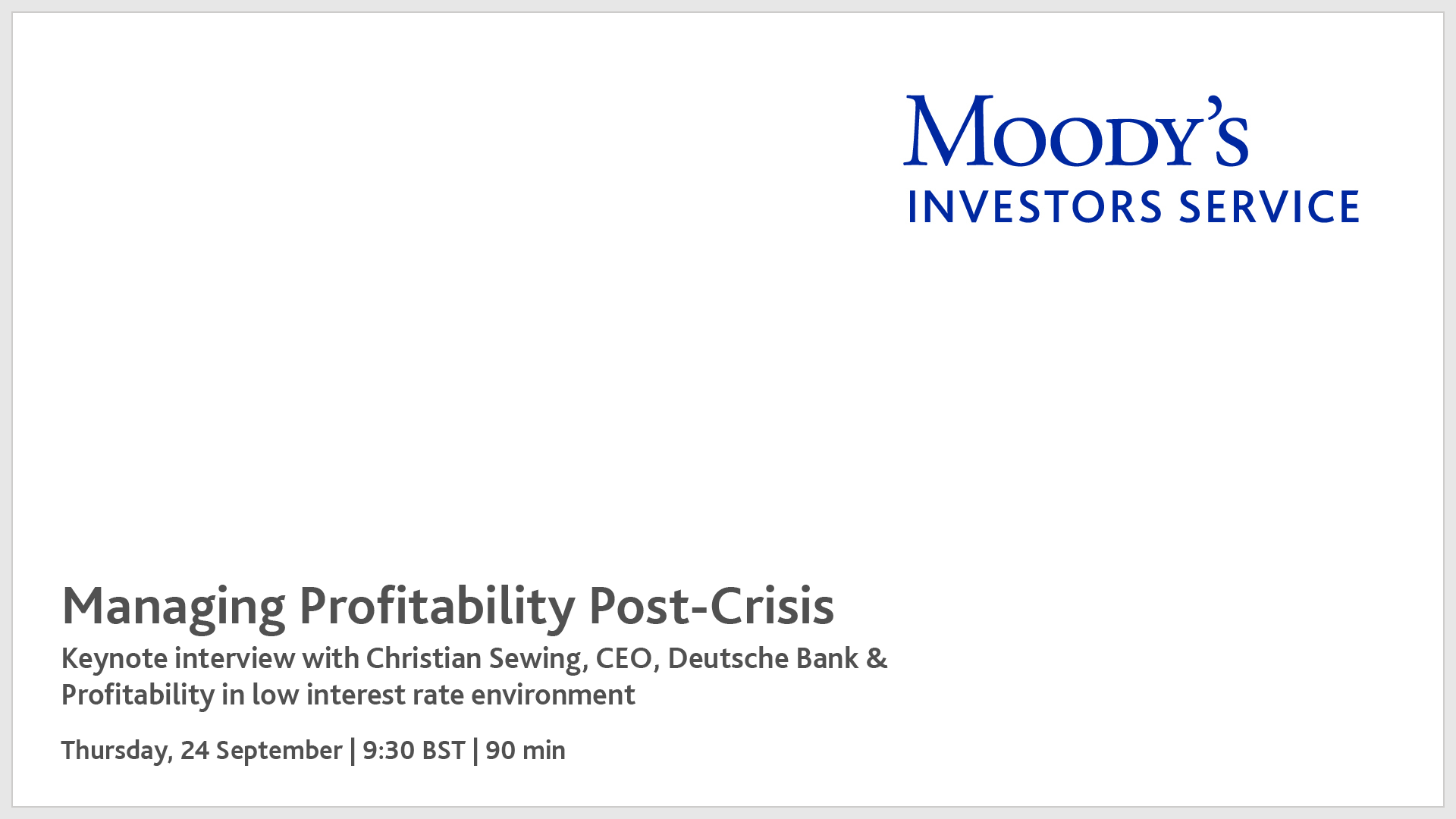 Explore our agenda and build your schedule.

Christian Sewing has been a member of the Management Board since January 1, 2015 and Chief Executive Officer since April 2018. On July 7, 2019 he took on additional responsibility for the newly established Corporate Bank and the Investment Bank.

He joined Deutsche Bank in 1989. From January until June 2015, he was responsible on the Management Board for Legal, Incident Management Group and Group Audit, and assumed responsibility for Deutsche Bank’s Private & Commercial Bank (including Postbank) between July 2015 and April 2018. He was Head of Group Audit from June 2013 to December 2014, prior to which he held a number of management positions in Risk. From 2012 to 2013, he was Deputy Chief Risk Officer. From 2010 to 2012, he served as the Bank’s Chief Credit Officer. He has worked in Frankfurt, London, Singapore, Tokyo and Toronto.

From 2005 until 2007, Christian Sewing was a member of the Management Board of Deutsche Genossenschafts-Hypothekenbank.

Laurie Mayers is an Associate Managing Director in Moody’s European Banking team. Laurie has responsibility for the analytical teams covering bank and non-bank financial institutions in the UK and Ireland as well as for the global investment banks located in EMEA and North America. Leveraging her risk and regulatory background, she also provides leadership within the Financial Institutions business unit on the cross jurisdictional implications for banks of the implementation of Basel III, the BRRD and TLAC/MREL requirements, UK ring fencing and Brexit.

Prior to Moody’s, Laurie’s most recent role was Manager of the Capital Management Team at the UK Financial Services Authority (now the Prudential Regulation Authority), where she had responsibility for Pillar 2 capital assessments and firm-wide stress testing for the largest UK banks and building societies.

Laurie’s previous roles include Partner, Risk and Regulatory Advisory, Ernst & Young, Group Head of Basel 2 and a member of the Group Risk Executive Team at RBS, Global Head of Counterparty Credit Risk at RBS and previously, Principal and EMEA Head of Credit for Morgan Stanley International. Laurie began her career at as a staff economist at the New York Mercantile Exchange , and subsequently worked as a lending officer in the Commodity Finance Division at Chase Manhattan Bank following completion of their credit analyst training programme.

Sean Marion is Managing Director in the Financial Institutions Group, based in London. He is responsible for Moody’s analytic teams that rate banks and nonbank financial companies in the Nordics, Baltics, South-Eastern Europe and emerging markets in Middle East and Africa. Prior to relocating to London in 2011, Mr. Marion held various positions of progressive responsibility in Moody’s, including working in the firm’s offices in Mexico City and Toronto.

Before joining Moody’s, Mr. Marion worked for The Economist Intelligence Unit, conducting research on macroeconomic and country risk. Mr. Marion holds graduate degrees in economics from the Université Paris I (Sorbonne) and the London School of Economics. He also holds an undergraduate degree from Bishop’s University, Canada.

Mr. Marion is fluent in French and Spanish.

Louise joined Moody’s in November 2016 and is the lead analyst for most large Nordic banks.

Prior to joining Moody’s, Louise spent nine years at Standard & Poor’s. She initially worked as a senior credit analyst in the Sovereign and International Public Finance Group, and thereafter in the Financial Institutions Group - during the global financial crisis. The last 4 ½ years at S&P, Louise headed up the rating agency’s Banking Industry Country Risk Assessments (BICRAs), the key element of bank ratings, globally.

Prior to working at Standard & Poor’s, Louise spent ten years at the European Commission in Brussels, primarily working with macroeconomic forecasts and analysis at the Directorate General for Economic and Financial Affairs (DG ECFIN), and a couple of years working with EU affairs at the Swedish Ministry of Finance and Central Bank. Louise holds a Master of Science in Business Administration and Economics from Uppsala University.