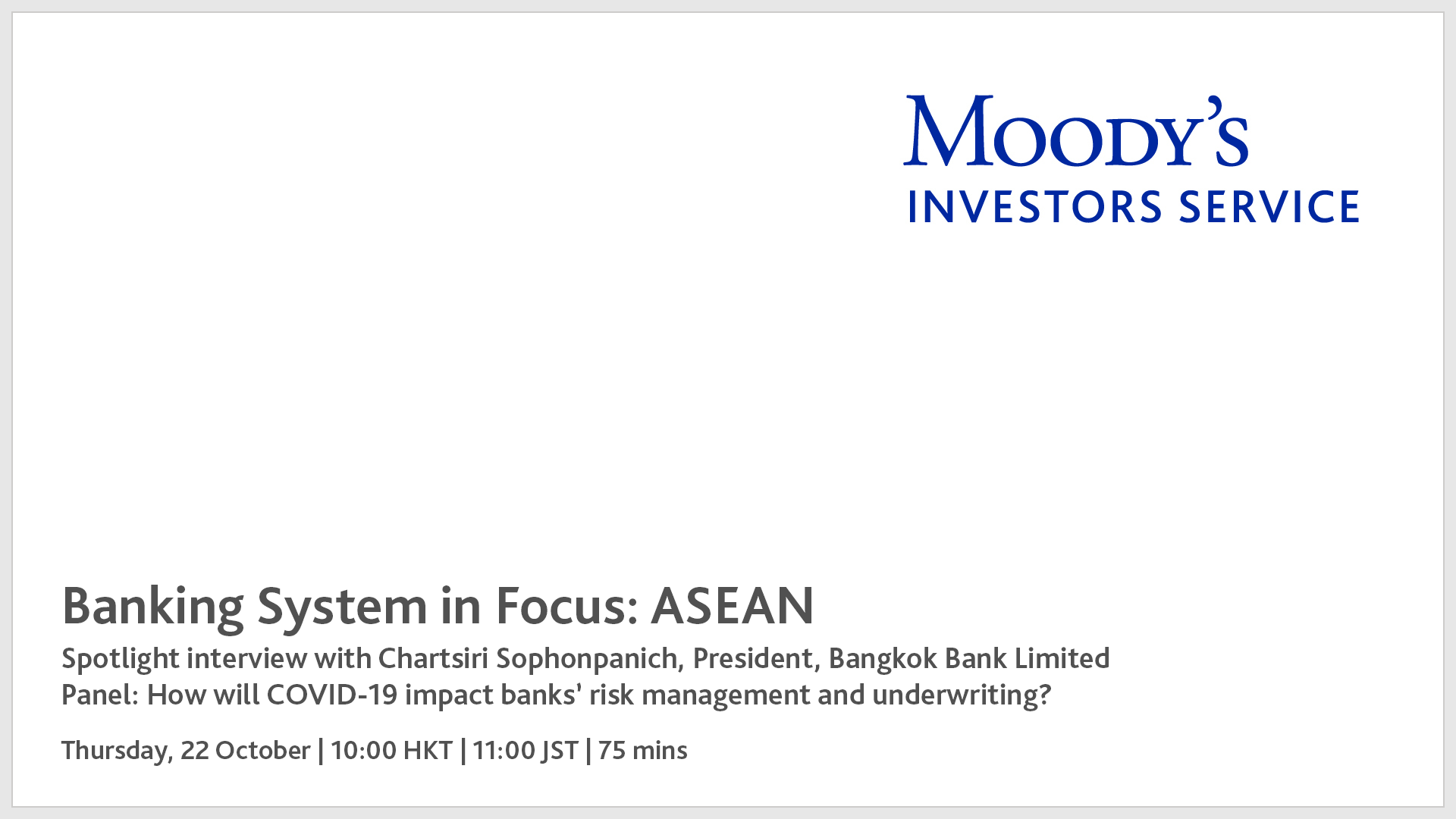 Panel: How will COVID-19 impact banks’ risk management and underwriting?

The Bank has a long-standing presence across Southeast Asia, as well as in China, Japan, Hong Kong, Taiwan, the United Kingdom and the United States. Its international network includes more than 300 branches in 14 economies, the largest overseas network of any Thai bank. Its major international subsidiaries are PermataBank, Indonesia’s 12th largest bank by total assets, serving 3.75 million customers in 62 cities across the archipelago and a pioneer of mobile banking and mobile payment technology in Southeast Asia’s largest economy; Bangkok Bank (China), with six branches providing coverage across the major regions in China; and Bangkok Bank Berhad, with five branches across Malaysia.

Eugene Tarzimanov is a Vice President–Senior Credit Officer for the Financial Institutions Group in Asia. Based in Singapore, he is the Lead Analyst for banks in Southeast Asia, including Singapore, Malaysia, Vietnam, Sri Lanka and Bangladesh.Eugene is also responsible for coordinating banking research across Asia Pacific,and actively represents Moody’s to regulators, investors and the media on analytical and methodological views.Eugene moved to Singapore from Moody’s Moscow office, where he covered the argest banks in Russia, as well as financial institutions in Europe and the Middle East.

Gilbert Kohnke serves as Group Chief Risk Officer of the Company. He has Master of Business Administration, University of Hawaii, Manoa, Bachelor of Commerce (Accounting), University of Windsor, Canada, Bachelor of Arts (Economics), University of Western Ontario, Canada. He has over 30 years of experience in global financial institutions, with a proven track record of risk expertise. He was the Group Chief Risk Officer for Danske Bank AS and OCBC Bank. FY2019 Key Achievement(s): Led Group Risk’s transformation to be enterprise and strategic-focus driven. Significant enhancements achieved in Credit, Portfolio Management, Non- Financial Risk areas, people practices, and training.

Ahmad Siddik Badruddin was appointed as Director responsible for Risk Management in March 2015 after joining Bank Mandiri as SEVP-Retail Chief Risk Officer in May 2014.

He has had 29 years of banking experience primarily at Citibank/Citigroup with increasingly bigger international assignments and roles based in 7 countries in Asia (Indonesia, Singapore, Hong Kong and the Philippines), Europe (Germany, United Kingdom) and the U.S.A. (New York).

When he was based in London, U.K., he was Managing Director – Risk Management, responsible for the oversight of the consumer loan portfolios in 11 countries in Central/Eastern Europe and the Middle East Africa regions.

He joined Citibank in Indonesia as a Management Associate in 1990 upon graduation from the University of Texas at Austin, U.S.A. (Bachelors of Science in Chemical Engineering and MBA in Information Systems Management with merit scholarship from IBM).

Mr. Dmytro Kolechko holds a Master’s degree in  International Business Administration from Kiev National University of  Economics. He has over 20 years of working experience in banking industry, with  over 14 years in senior leading positions in risk management, including Chief  Risk Officer (CRO) at Raiffeissen Bank Ukraine, CRO at Alfabank Ukraine, and  CRO for Hypo-Alpe-Adria Bank in Bosnia and Herzegovina. Since 2015 he has held  the position of Head of Risk Management Division (CRO) at Vietnam Prosperity  Bank (VP Bank).

Rebaca Tan is an Assistant Vice President – Analyst for the Financial Institutions Group in Asia. Based in Singapore, Rebaca is responsible for the credit ratings of financial institutions in Vietnam and Thailand.

Prior to joining Moody’s, Rebaca worked as a banking regulator at the Monetary Authority of Singapore.